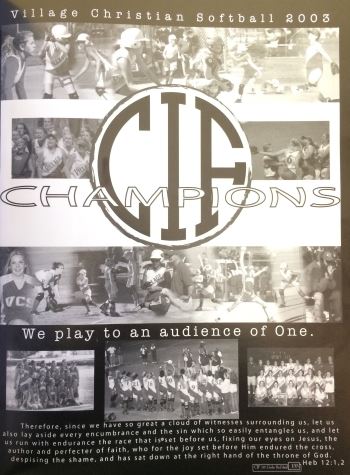 After managing just two hits through the first five innings, Village Christian (22-6) sent nine batters to the plate in the sixth, resulting in all four runs.

Pasadena Poly (27-3) committed four errors in the inning, which combined with two key Crusader hits, proved to be enough for Jim Stone's squad.

Glendale resident Alex Kinney went one for four and scored a run, as did Meghan Hanna, Amy Servillo and Laura Stone.

Nydam (12-1) scattered five hits, including three in bottom of the seventh, as Pasadena Poly rallied to score a run against the junior right-hander. The Panthers had the winning run at the plate twice in their last at-bat, but Nydam struck out two of the final three batters.

It marked the second time in seven days that Village Christian won a division title. The Crusader boys' volleyball team became the first squad in school history to win a championship when it defeated Brentwood in the Division IV final May 31.