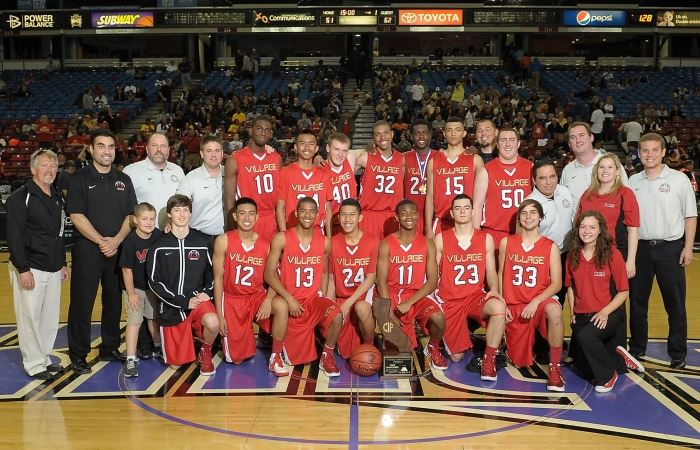 At last, a first for Crusaders

SACRAMENTO – Marquis Salmon walked off the court for the final time Saturday with the same confidence he demonstrated when he first took the floor at Power Balance Pavilion.

Although the Village Christian senior fouled out with more than four minutes remaining and the Crusaders leading by only four points in the Div. V boys’ basketball state final, Salmon entrusted his teammates to complete the championship journey.

For the first time in the school’s 63-year history, Village Christian finally did.

“These guys are my brothers. They have my back and they know I’m there for them,” Salmon said. “Last year, I couldn’t say I loved everybody on this team, but this year I can. This is about building friendships that last a lifetime.”

That chemistry enabled Village Christian (32-3) to rebound from a 64-52 loss Feb. 24 to Ribet Academy in the Southern Section Div. V-AA semifinals to win its final five games.

The Crusaders’ resolve also allowed them to overcome Alberts being sidelined for the majority of the second quarter with three fouls, and persevere despite Salmon watching from the bench down the stretch.

“All season long, they’ve done an unbelievable job of buying into what it means to be a team. They’ve believed in each other and fought for each other, which isn’t easy to do in a society that promotes me instead of we,” Village Christian coach Jon Shaw said.

“We prepared them to beat the best and they beat the best because they were the defending champions. Our defense showed an unbelievable will to get stops in key moments.”

When the final horn sounded Saturday, it was only appropriate Alberts – who hit a 3-pointer with 40 seconds left in this year’s regional championship to defeat Renaissance Academy 58-57 – was again holding the basketball, before being surrounded by jubilant teammates and coaches.

“After the Ribet game, we were devastated, but we came together as a team and as a family. We knew we weren’t going to let that happen again because we wanted to prove to everybody that we were the best team,” Alberts said.

“It’s unbelievable how we all came together from so many different places to this one school and created such incredible chemistry.”

Despite the Crusaders appearing in their first state final compared to St. Joseph Notre Dame (29-6) attempting to win its fifth title in eight trips, Village Christian handled the arena setting better, with its length on defense and offensive balance frustrating the Pilots, who shot 28.6 percent (16 of 56) from the field.

Temidayo Yussef had 15 points and 13 rebounds, with Gemeny Givens adding 14 points for St. Joseph Notre Dame, but the tandem combined to make only 4 of 14 second-half attempts.

“They have a college-sized lineup and you don’t see that (height) in the Bay Area,” Pilots coach Don Lippi said. “Give them credit, they switched defenses from zone to man and it was a long zone, which bothered us. They’re really good competitors and they have some really nice players and they’re young, so they’re going to be good again next year.”

But it was four 3-pointers from Shashaty, two in a 45-second span after Salmon fouled out to increase the lead to 53-45, which earned him Player of the Game honors in his high school finale.

“It’s overwhelming,” said Shashaty, who transferred from St. Francis to Village Christian before his sophomore year. “Last year, exiting early (against St. Margaret’s in the second), it meant we had to come back and fight even harder, so I’m proud we did. I’m just glad I had the opportunity to be on the court to hit those shots.” 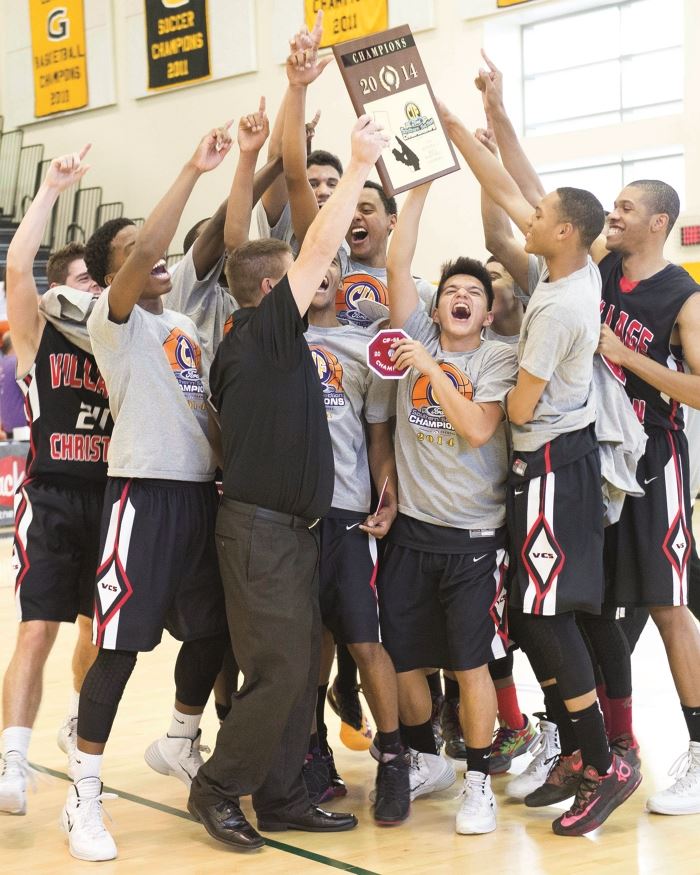 By Ronnie Flores
Village Christian of Sun Valley wins boys CIFSS Div. 4-A title with victory over Windward of Los Angeles. The Crusaders enter the regional playoffs on a 10-game winning streak since a loss to state No. 1 Mater Dei and is a viable contender for the Division IV state title.

Nothing, not even a flat tire on the bus ride over to the game, was going to deny the Village Christian of Sun Valley boys basketball team a CIF Southern Section title.

The No. 1 seeded Crusaders overcame a late arrival, and a talented Windward of Los Angeles unit, to capture the CIFSS Division 4-A title with a 71-67 victory on Saturday afternoon at Godinez High School in Santa Ana. It was the program’s first section title in boys basketball.

Village Christian is peaking heading into the SoCal regionals after having to overcome injury and personnel issues during the regular season. Village Christian will be gunning for its second state title in four years when the regional opens this week. The Crusaders won the Division V state title in
2012, but did not win a section title that season.

“Our team showed great resilience,” Village Christian coach Jon Shaw said. “We played collectively together and all season long its been phenomenal. The kids have played for each other.”

Village Christian (26-4) jumped out to a 16-5 lead after one quarter as Windward (22-9) didn’t shoot well from the field. The Wildcats missed their first 10 field goal attempts and went 2-of-15 from the field in that opening period. Windward clawed it way back into the game as an underclass-dominated group was trying to hand outgoing coach Miguel Villegas his second section title. He won the CIFSS Div. 5-A title in 2009 and went on to capture the Division V state title that season.

“I knew it was going to be a street fight because Windward is a good team and tough,” Shaw said.

Windward stormed back to take a 38-37 lead with 2:59 remaining in the third period to cap a 10-0 run. Village Christian regained control in the fourth period, mainly behind its free throw shooting. Razhaun “Bear” Henderson made two free throws with under 15 seconds remaining to give Village Christian a 69-63 lead and Bryan Alberts made two with .4 seconds to go after Windward’s Jaylen Harris knocked down a 3-pointer to seal the championship for the Crusaders.

Henderson scored a team-high 17 points while Alberts and junior Bennie Boatwright added 16 points apiece. Boatwright also had 13 rebounds and made all 10 of his free throws attempts. As a team, Village Christian made 23-of-29 while Windward made 16-of-25.

It wouldn’t surprise us, however, if Village Christian is seeded higher in the SoCal Div. IV regional than at least one of the four Division IV teams that competed in the CIFSS Open Division bracket (Cantwell Sacred Heart, Gardena Serra, Bishop Montgomery, and Sierra Canyon). Most likely Village Christian will be seeded lower than Sierra Canyon, which won the open division consolation bracket.

“Wherever they place us is fine, I’m just happy were going to go to state,” Shaw said. 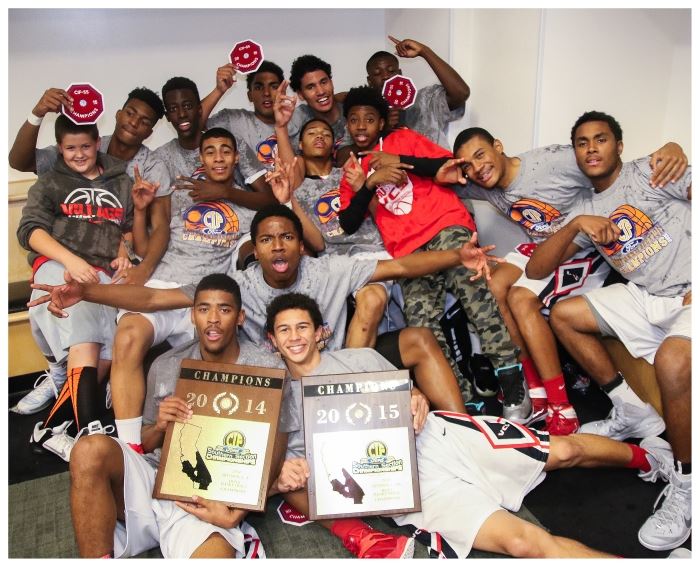 ANAHEIM >> When you have the top two seeds playing for a title, you expect a competitive game. It was.

But it was second-seeded Village Christian using an early fourth-quarter spurt and pulling away for a 79-61 win over top seed Temecula Great Oak in the CIF Southern Section Division 1AA title game on Saturday at the Honda Center.

“Our guys showed great resiliency,” Crusaders coach Jon Shaw said. “It speaks to who they are. We got 11 stops in the fourth quarter and we haven’t done that all year.

“Defense wins championships, and that helped us put the game away.”

There were two other areas in which Village Christian had a notable advantage. The Crusaders made 25 of 30 free-throw attempts while Great Oak had just eight tries, making four.

The Crusaders also enjoyed a 43-27 advantage on the boards, led by USC-bound Bennie Boatwright, who had 13 rebounds to go with 30 points

“We knew Boatwright was going to be a big matchup problem, and he was,” Great Oak Coach Bob Hickey said. “You put too much attention on him and it opens things up for their other guys.”

The contest was close for three quarters, with the biggest advantage by either team being eight points. Village Christian (28-6) led 18-13 after the first quarter, 36-33 at the half and 55-47 after three quarters, its biggest lead of the contest to that point.

A 3-pointer by Kahlil Simplis with 7:13 left in the game gave the Crusaders a 59-49 lead, the first double-digit advantage of the game. Village Cristian coasted from there.

Boatwright was followed by Clifton Powell with 17 and Simplis with 11.

Great Oak was led by Latrelle Franklin with 25 points, although it took 26 shots to get there.

“We did a good job of holding their top three players,” Shaw said. “We knew Franklin was going to get his, but at least we made him work for them.”