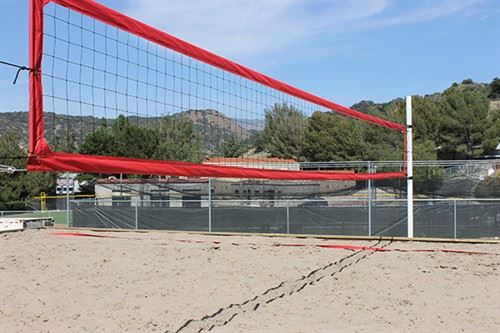 Less than one year into historic campus-wide efforts, The Village Campaign is more than half way toward its fundraising goal of $2.8 million. It is also already hard at work providing new and unique opportunities for Village Christian students.

On Thursday, March 19, VCS completed its brand-new sand volleyball court, which is located on the south side of the softball field. The sand volleyball court was one of ten target projects identified in The Village Campaign’s Athletics and Arts Initiative, one of six VCS enhancement initiatives.

This exciting on-campus addition was completed approximately four months after the initial planning meeting was held in November 2014. The court features 125 tons of sand, a uniquely designed drainage system, and new facilities equipment.

“Sand volleyball is now a sanctioned NCAA sport with six scholarships available per Division I school and is growing rapidly in popularity,” said VCS head coach Bill Schnobrich. “As a volleyball program, we are in on the ground floor of this fast-growing sport and will have our student-athletes prepared to take advantage of the opportunities as they arise.”

Village Christian, which fields a roster of 15 players, began offering sand volleyball in 2013 and competes in the Mountain Division from March through May. Approximately 60 schools in Southern California currently offer beach volleyball, but most have to play and practice off site.

“The addition of our new sand volleyball court is another step forward in our commitment to offering the best programs and facilities in the San Fernando Valley,” said VCS Athletics Director Kevin Aust. “Not only will Village Christian be one of the only sand volleyball schools with a court on campus, but the facility will be utilized for the development of athletes from all sports through our strength and conditioning program.”

According to VCS Head Strength and Conditioning Coach Andy Campbell, the new sand volleyball court will be integral in the training of Village student-athletes. Some of the benefits include: