One would be cause for celebration, but on November 17, 2015, a school-record eight Village Christian seniors signed National Letters of Intent to continue their athletic careers in college.

Until Tuesday, four signees was the most from any given class in VCS history – and there may be more announcements to come as the year progresses, according to athletic director Kevin Aust.

“As the athletic director of a small school, I often hear families say, ‘Will colleges find me if I play sports at your school?’ or ‘We are leaving to go to a bigger school so our student has a better chance at earning a scholarship.’ In spite of our best efforts to convince families that this is not true, many believe the myth,” Aust said. “Today, we had eight VCS athletes sign their National Letter of Intent to play college sports, the largest single class signing in the history of the school. This class reminds us of the truth - VCS Athletics is thriving and your dreams of playing college sports can be achieved at Village Christian. I am extremely proud of our athletes and our coaches for this tremendous accomplishment.”

“It means everything,” said head girls volleyball coach Brent Asuka. “Team goals are always the most important for this program and what we are trying to accomplish, but these girls work hard, and their hard work has paid off for them. They are reaping the benefits of their hard work. It’s awesome for the program and individually for them to go on to the next level and play at a higher level.”

For the baseball program, Barta will play at Loyola Marymount University, while Ingebritson will head to Coastal Carolina University. Both are NCAA Division I programs.

It is the second year in a row an athlete has signed to play collegiate baseball after Chris Davidson also joined Coastal Carolina last year.

“It’s always a blessing when you get to see kids flourish and be able to either play at the next level or just be able to move on in their lives and go to college and pursue a career,” said head baseball coach Matt Whisenant. “But it does definitely help solidify what we are doing here at Village Christian as far as the baseball program is concerned. These last two years have been very exciting with the kids we have seen come up through the program. We are really excited as a coaching staff and a school, and they best represent what we are all about.”

Please join us in congratulating all eight student-athletes and their coaches and families on this incredible accomplishment. 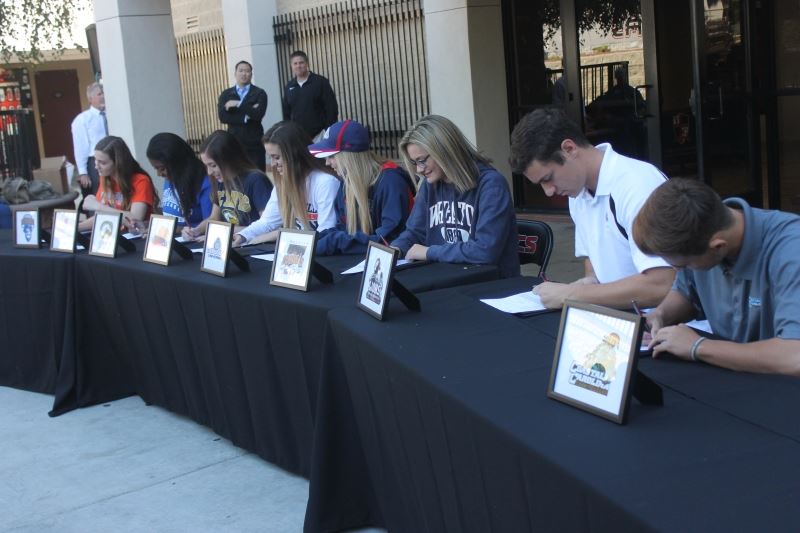