NORWALK – One year ago, the Village Christian girls volleyball program was on the cusp of winning its first CIF-Southern Section division title since 2007.

But a heart-breaking loss to South Torrance ended the Crusaders' run in the championship match.

Lacey had a team-high 19 kills to go along with 14 digs. Senior Kyra Banko finished with 15 kills, 13 digs, three blocks and three aces, while Selby Schnobrich had 44 assists with three blocks and two aces for VCS (31-7).

“Last year, we lost in the same finals, and we knew what it felt like to lose,” said Banko reflecting on the team’s 3-0 loss to South Torrance in 2014 – also at Cerritos College. “Being back in this gym, it didn’t feel great, to be honest. But we came out with heart, and we played our hearts out, and we executed the best.”

In the decisive third game, Banko took the set from Schnobrich and hammered it down on match point, sending the crowd into a frenzy.

“I was [thinking about it being the game-winner], but I wasn’t going to be nervous about it,” Banko said. “I didn’t let it get to me. I just wanted to go up and kill the ball. I put it away the best I could.”

Title - the seventh such championship in school history.

“I just feel relieved,” Schnobrich said. “I’m so excited and so proud of my girls. They really fought, and they didn’t let anything Chadwick did affect us.”

The Dolphins (27-4) came into the finals riding a 16-match winning streak and hadn't lost a single game in postseason play.

They also enjoyed an 18-17 advantage late in Game 1 after a series of runs wiped out Village Christian's early lead.

But the Olympic League-champion Crusaders went on an 8-1 run of their own to take the first game.

That mentality proved key in Game 2 as long rallies and exchanged runs led to a nail-biting finish.

With VCS up 23-20 after a Brenna Wolfe block, Chadwick closed the gap and the two teams began trading points.

However, the Crusaders put the game away when Lacey finessed a shot to the back corner for game point and the 27-25 win.

The Crusaders had lost Game 2 in each of their previous two playoff matches. In the finals, earning the 2-0 advantage wound up being too much for the Dolphins to overcome.

The momentum carried into Game 3 as the Crusaders opened up an early lead and never looked back.

Chadwick began to edge its way back into the game, forcing VCS to call a timeout with a 15-12 lead.

However, the Crusaders responded with a 10-4 run to close out the match, punctuated by Banko’s title-winning kill. 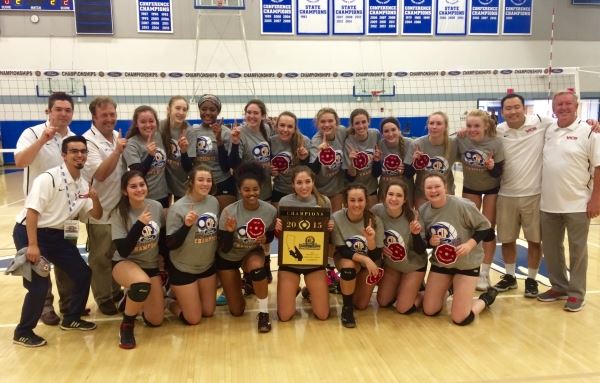 For Director of Volleyball Operations Bill Schnobrich, the win marked the second CIF section title the Crusaders earned during his tenure. Schnobrich also won the 2003 CIF-SS Division IVAA title as the head coach of the boys volleyball program.

“It’s a little bit euphoric,” Schnobrich said. “This has been many, many years in the making. Lots of emotion. Very elated. When you work so hard for something and it happens, it’s just 'wow.'”

“This is a long process," Asuka added. "I'm speechless. I can’t put it into words. It’s awesome, but ‘awesome’ doesn’t describe it well enough. ... The program is rising, and we have to keep it going.”