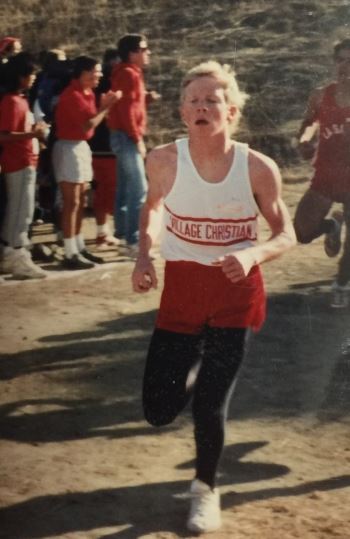 The Village Christian Athletics Department is proud to announce its Hall of Fame inductees for 2015 – cross country star Ryan Coady (Class of 1989) and acclaimed running back Chad Everett (Class of 1992).

Coady, a four-year varsity letterman in cross country, held every individual VCS distance record when he graduated from Village Christian in 1989. The decorated runner earned All-CIF and All-State honors as a junior and a senior and was a member of the 1987 boys cross country team that earned the school its first-ever trip to a state competition in any sport. At the state meet, Coady finished in 10th place as a junior and eighth as a senior.

"I am honored to be inducted into the Athletics Hall of Fame,” he said. “I can finally prove to my kids that I was once a good athlete. The relationships I made while attending VCS and running cross country are definitely the highlight of my nine years at Village."

Coady lives in Tempe, Arizona and has been a mortgage banker for 10 years. He has three kids, Lauren (16), Matthew (14), and Clarie (9) and attends Grace Community Church in Tempe.

Everett rushed for more than 1,000 yards in both his junior and senior years and helped lead the Crusaders to postseason semifinal appearances in 1990 and 1991. The talented running back earned first-team All-Alpha League honors as a junior before capturing the Alpha League Most Valuable Player award as a senior. Everett also represented VCS in the Daily News All-Star Football Game in 1991 featuring top talent from across the Greater Los Angeles area.

"It is an amazing honor to be inducted into the Hall of Fame,” Everett said. “The school had a significant impact on my life, and the only thing better than going to Village is having my kids, nieces, and nephews attend now."

Everett is one of three brothers to graduate from VCS, all of whom have children currently attending Village Christian. He lives on Penrose Street in Sun Valley with his wife, Kim (Oddone; VCS Class of 1991), and their two sons, Logan (10) and Gavin (7). Everett has worked in real estate finance for 14 years and attends Real Life Church in Santa Clarita.

Please join us in welcoming these two distinguished Crusaders into the Village Christian Athletics Hall of Fame.