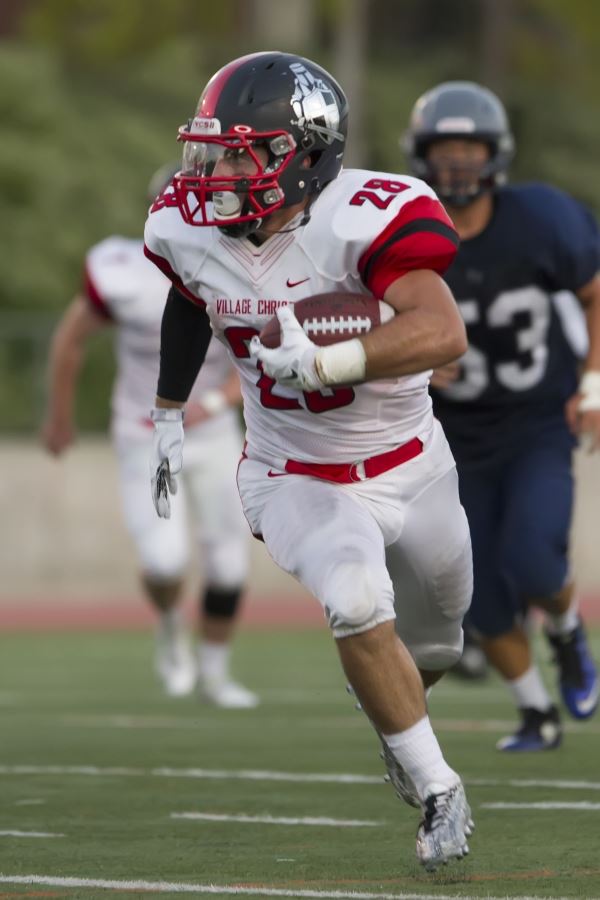 Village Christian senior running back Aiham Aboul-Hosn knew he was having a good game.

But it wasn’t until halftime of the Crusaders’ 56-22 win over Flintridge Prep on Sept. 19 at Occidental College that Aboul-Hosn realized it could become historic.

“Going in at halftime, I knew I had four touchdowns and I knew the record was five beforehand,” he said. “I came out the second half and put my mind to it, and I got the first record.”

Aboul-Hosn wound up setting a staggering three records against the Rebels, including touchdowns (eight), points (48), and total rushing yards (331) in a game.

His eight total touchdowns, which included seven rushing scores and a 29-yard touchdown pass from quarterback Wyatt Banko, and points in a game bested Doug Schoenborn’s marks of five and 30, respectively, both set in 1984.

“In the beginning [of the game], coach [Jason] French kept giving me the ball,” Aboul-Hosn said. “The flow of the game – we just had a huge emphasis on the run game and that kept working for us. They couldn’t stop the run. Our lineman did absolutely amazing and they just couldn’t stop us.”

“Aiham had a special day. Village has a rich tradition of football excellence and most of that was built on running the football,” Bates said. “The fact that he was able to set two rushing records in the same game was very significant. I thought he played outstanding.

“The whole offense, including the offensive line was doing a great job,” he added. “As my coach here, the legendary Mike Plaisance said, ‘Linemen gain yardage and backs carry the ball. I thought Saturday’s game was a partial testament to that truth.”

Aboul-Hosn isn’t the first member of his family to make his mark on the record book. Amjed Aboul-Hosn, who played from 2009 to 2011, has seven records of his own at Village Christian.

“It holds something really deep with my family,” Aiham Aboul-Hosn said. “It’s really great to feel like I stand next to my brother holding up big-time records in this school, this great program, and the great teams of the past. It feels great to be able to be up there with all those names.”

The record-breaking run came on a 58-yard rush in the third. Aboul-Hosn took the handoff from Banko, burst through the line, and made a quick cut outside. After breaking a tackle, the senior raced up the sideline for the score.

Aboul-Hosn closed out his performance with a 29-yard touchdown catch in the fourth quarter, capping a series of records that could stand for a long, long time.