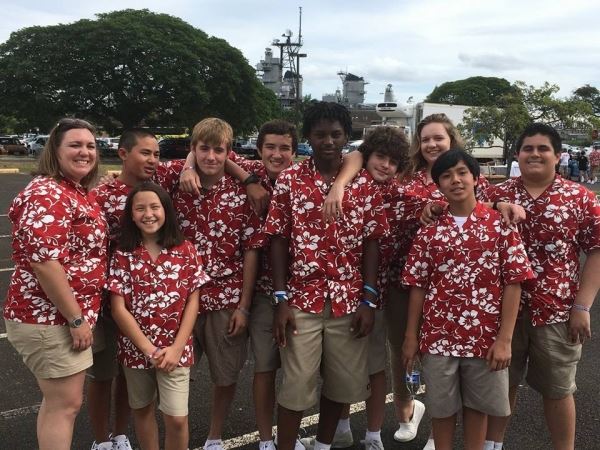 December 7, 2016, marked the 75th anniversary of the attack on Pearl Harbor, and representatives from Village Christian School were on hand to participate in a once-in-a-lifetime ceremony honoring the veterans of the infamous event.

VCS Middle School and High School students, along with Band Director Amy Martens, performed with more than 1,600 other students from across that country and Japan in a moving tribute at Pearl Harbor in the shadow of the USS Missouri.

“It was nice to know we were part of history,” said eighth-grader Danny Fonseca.

Added sixth-grader Theone Tutak: “It’s hard to wrap my mind around that – the history.”

Village Christian received an invitation from Music Celebrations International, with which the school has worked in the past, to participate in the event.

“I don’t know if I can [qualify the experience],” said Martens, who also served as a section conductor during the performance. “I was just really glad to be part of it. It’s good for a school this size to be part of something that big.”

The group was in Hawaii from December 5-9 and visited the USS Arizona, hiked Diamond Head, and saw other sites in addition to anniversary-related activities, where they spoke with military veterans and met people from across the country.

Those interactions had a profound impact, said Mustafa-Knowles.

“You have something to look up to,” he said. “You have to try. You are trying to be more like them; to help out your country.”

There was only one corporate rehearsal in advance of the event, so the students did most of their preparation before flying to Hawaii.

The performance was broadcast on local television as well as streamed on numerous websites, including the Navy’s, Department of Justice, and Pearl Harbor Anniversary’s official sites.

“It was a once-in-a-lifetime experience to be there and hear the stories from people and relive the moment,” Newton said.

Added Mustafa-Knowles: “You felt like you were part of something, and you felt proud because everyone was there and it sounded so good.”