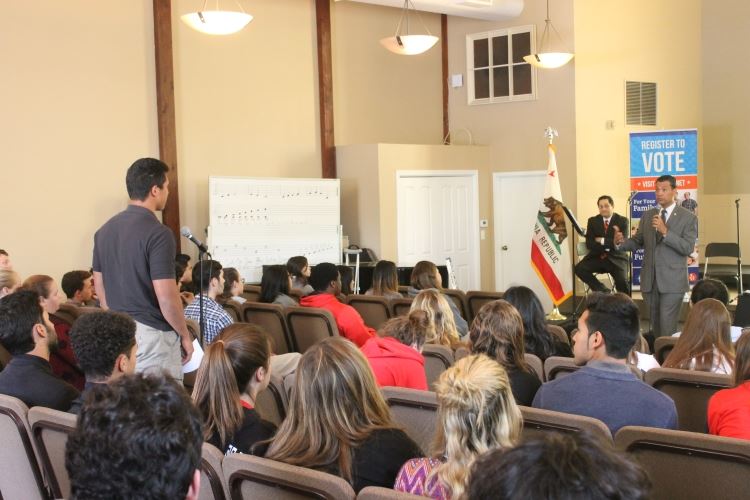 California Secretary of State Alex Padilla was on campus Friday, April 29, 2016, to share his story with Village Christian students and emphasize the importance of exercising their civic rights.

“I’m here to urge you to register to vote,” Padilla said. “It’s how we determine the future of our school, our city, and our country.”

The Pacoima native conducted two presentations – one to fourth grade students and one to high school seniors, who were also give the opportunity to register to vote afterward.

Each session included a Q&A with students, giving Padilla the opportunity to share more of his personal experiences as well as provide insight into his positions on various issues. 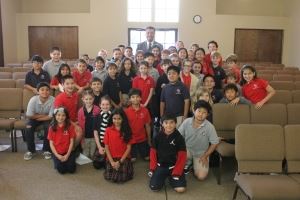 “All the jobs I’ve had are about helping people,” he told the elementary students. “I especially like visiting schools. When I get to talk to young people, I love to talk to you about why it’s important to get involved in your community and vote. I know you are going to make great decisions.”

The VCS fourth graders asked questions covering a wide variety of topics, including meeting the president, running campaigns, and working with the governor. They also learned nuances about the California state seal and Padilla’s role as Secretary of State.

After a brief break, it was the high schoolers’ turn, and the questions honed in on more hot-button issues.

Students sought clarity on the Secretary’s voting record during his eight years in the State Senate. Questions included his positions on the minimum wage, high-speed rail, and election reform.

Senior Ryall Rivera asked Padilla, “Mr. Secretary, in 2011, while a member of the State Senate, you voted YES on a bill that allows colleges to take race and ethnicity into consideration when deciding which students to accept, effectively legalizing affirmative action for another generation of young people. How is this not a form of reverse discrimination in the 21st century?” 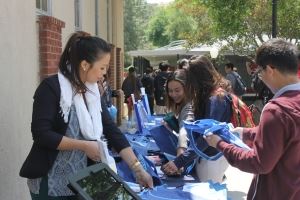 Another asked Padilla to enumerate the ways he plans to ensure clear and mistake-free voting systems throughout the state.

“It is important to vote, but it is also important to be informed,” Padilla said. “I can tell you’ve done your homework,” he said in complimenting the seniors.

Currently in his first term as California’s Secretary of State, Padilla also served as a State Senator in Sacramento and as a Los Angeles City Councilman. The MIT graduate worked as an engineer for Hughes Aircraft before entering public policy as a staff member for U.S. Senator Dianne Feinstein and then-Assemblyman Tony Cardenas.

“I am grateful that the Secretary came to give our students a first-hand glimpse into state government,” said Head of School Tom Konjoyan. “We want our students to make a difference in their communities and country. If one student was inspired to run for public office or registered to vote, then it was a successful day.”
Posted By VCS
Categories:
Tweets by VCSCrusaders