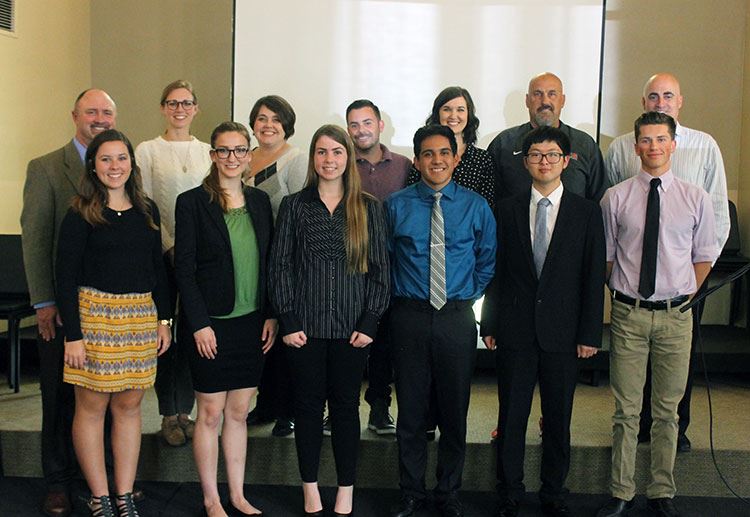 Seniors representing all six Village Christian Concentrations competed for a $2,000 scholarship on Monday, capping a record-breaking year for senior projects.

While the results won’t be known until the inaugural Illuminate ceremony next week, something else was revealed during the second annual Senior Project Competition.

VCS students are diving deeper into their Concentration studies than ever before, and their efforts are garnering school-record-setting college acceptances.

“The quality of projects this year was astounding,” said Concentrations Provost and Associate Head of School for Academic Life Ray Endacott. “There were projects that were similar to research done by Master’s degree candidates and well beyond entry level in their scope. The work done by these students enriched not only our local school community, but touched the lives of people all around the globe.”

In total, 41 projects across the six Concentrations were completed during the 2015-2016 academic year – a 33-percent increase from Village Christian’s previous best.

Each Concentration held its own competition at the end of April. These individual winners presented Monday, demonstrating a wide variety of competency and achievement.

However, the most impactful aspect of each presentation may have been the personal growth, discovery, and confidence-building each student experienced during the execution of their senior project, including empowerment, relational growth, and nurturing passions.

And that was the goal when these began the Concentrations program at Ignite four years ago – taking a potential career-interest spark and fanning it into flame.

Another goal was to prepare VCS students for the next level of academic pursuit – another success for the Class of 2016.

One hundred percent of seniors who applied to a colleges were accepted to at least one choice, earning $5.4 million in total scholarships. Twelve student-athletes will also continue their careers at the collegiate level.

The Class of 2016 will be celebrated at Illuminate, which will be held on Tuesday, May 17 at 7 p.m. in the Kendall Pavilion.

“I am proud of our seniors’ incredibly successful pursuit of admission to college,” said Head of School Tom Konjoyan. “They are living out our motto of ‘College-bound from kindergarten, Christ-centered for life.’”