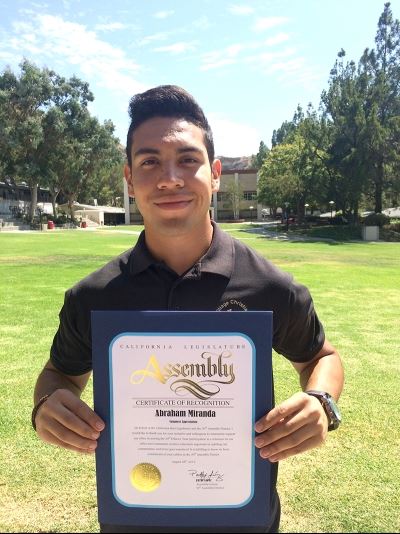 From arts to athletics to clubs, students have the opportunity to get involved in a wide variety of ways at Village Christian School.

But Miranda’s involvement extends beyond the VCS campus, his work in the community garnering numerous honors.

A three-sport athlete, Maestro Award-winning member of the choir, and mainstay on the VCS stage, Miranda has earned the Youth Promise Award from La Prensa de Los Angeles, a Certificate of Recognition from District 39 Assemblywoman Patty López, and a nomination for the 2016 Latino Spirit Awards’ Dynamic Youth Award.

“Something my family taught me was to always try to achieve your goal, but along the way, help those in need,” he said.

And that’s exactly what he’s done.

For years, he was worked with persons with disabilities and joined missions trips with his church and VCS.

He has a desire to give back in a way that attracted the attention of Assemblywoman López’s office and led to a six-month internship with the 39th district.

“As a Christian, that’s our calling,” he said. “In the Bible, it says that Jesus told the disciples, ‘When you fed the hungry, the needy, the cold, when you clothed them, you were helping me.’ That was something my family instilled in me, so that’s why I always felt the need to help others.”

Attempting to harness the community’s voice, he coordinated a survey gauging public opinion about the proposed high-speed rail system.

Miranda built the survey and began distributing it around VCS and into the surrounding area.

The valuable data caught the attention of López and other Assembly members, who began talks to reach an even wider audience.

“Abraham is a shining example of how California’s youth are already changing our communities for the better,” said California State Assemblywoman Patty López. “Aside from his academic achievements, he has done amazing work with several nonprofit organizations. He is extremely dedicated to helping those in need. He is intelligent, hardworking and passionate about making a real difference. I have no doubt we will see him accomplish even greater things in the future.”

Miranda’s internship was a stepping stone.

As were each trip to Mexicali, each theatre production, and each engineering club competition.

What hasn’t changed is his desire to make a difference.

Because what makes Miranda special isn’t just what he’s accomplished.

It’s what motivates him – his heart of service.