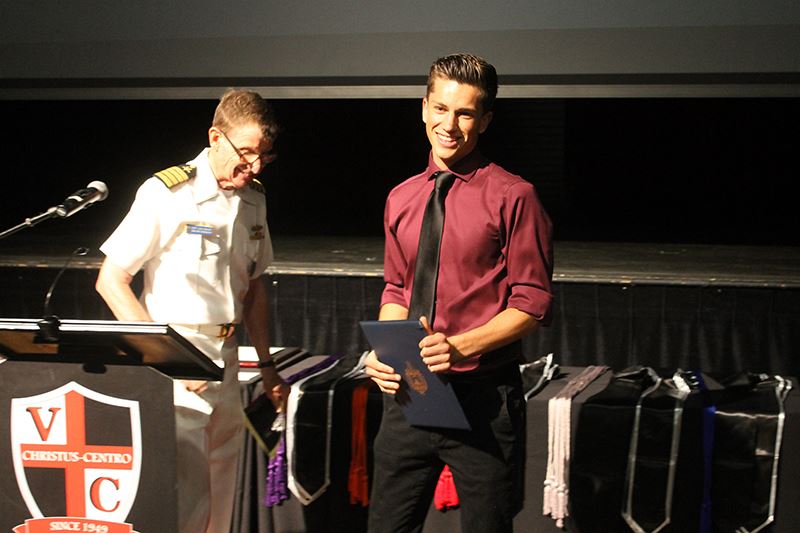 Senior Garrett Benning receives his commission to the United States Naval Academy at Illuminate on May 17, 2016.

Senior Garrett Benning was only 5 years old when he knew he wanted to go into the military.

“I had posters in my room everywhere,” Benning said. “Most kids play with tanks and toy soldiers, but it never left me.”

During the inaugural Illuminate Ceremony on May 17, he received his commission to the United States Naval Academy in front of a standing ovation, culminating a 13-year journey through the halls of Village Christian School.

“I felt really proud in that moment,” he said. “Everyone stood up and I didn’t know what to do. It felt like I’ve finally reached the finish line.”

As each student leaves their own mark on Village, so has the senior left his on Benning Violins.

During his junior year, Benning began working with a team of media consultants to facilitate an online expansion of the family business.

As his senior project within the Entrepreneurialism and Global Leadership Concentration, he took photos, wrote descriptions, and uploaded content, giving Benning Violins its own web presence in the global marketplace.

The company has now sold instruments across the country as well as throughout North and South America, Europe, and Asia – even selling violins to U.S. military troops serving in Afghanistan.

"Garrett took a passion area - his 60-year-old family business - applied the skills he learned in the EGL Concentration, globalized the business, and changed the trajectory of his family's future,” said EGL Dean John Khouri. “Garrett's senior project is one that we will hold up to future EGL students, for both its intentions and its results."

Naturally, providing soldiers with instruments struck a special chord with Benning, who reports to Annapolis, Maryland on June 30.

He plans to join the Marines and go into aviation.

School years will be spent on academic studies, while the summers will focus on military training.

Though he knows he will miss VCS, he can’t wait to get started.

“I think it’s the strong sense of community we have,” Benning said. “I grew up with the same friends for 13 years, so I’m definitely going to miss seeing them every day. When I come here it’s like family. I like the small, tight-knit feel of that. That’s what I’m hoping to get from the military – that same bond and connection.”

He’s also quick to thank the teachers for their dedication and personal attention.

And now looking back, he has advice for up-and-coming classes.

“Getting involved is definitely one, but just work hard. It’s a really crucial four years of your life,” Benning said. “This can really set you up if you do well. Just work hard and find quality friends that will encourage you. There were times when I needed help, and you need friends that are willing to help tutor you and push you along.”

As Benning can attest, it’s a proven formula that can help students thrive.

“Garrett Benning is a true renaissance man,” said VCS High School Principal Bruce Osgood. “He’s scholastically solid. He’s an incredible performing artist on the cello. He’s got amazing business skills as evidenced by what he did with his family’s business. And now he’s an officer and a gentleman. As a high school principal, I could not be prouder of any person’s accomplishments than I am of Garrett Benning’s.”