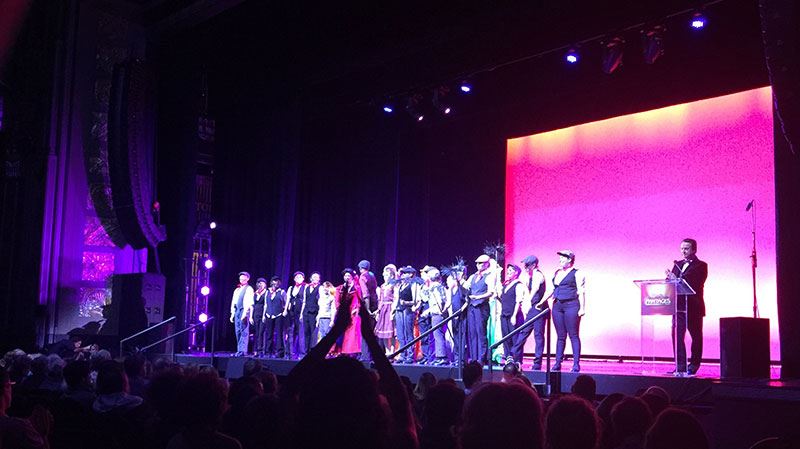 For many people, performing on stage at the legendary Pantages Theatre is a dream come true.

For Theatre Arts students at Village Christian, that dream became a reality Sunday, May 22, 2016, at the Jerry Herman Awards, when VCS took home a pair of honors that capped an incredible theater season.

Performing the last number of the night to a standing ovation, Village’s medley from Mary Poppins received Best Live Performance, sending the students and crowd into a frenzy. VCS also took home the Jerry Herman Award for Best Technical Crew to go along with the rest of the season’s haul, which included a Special Achievement Award from the John Raitt Awards for Youth and eight honors from the National Youth Arts Awards.

“Having these kids, especially the seniors culminating five years with me, they just built and built to end this year at the Pantages stage performing,” said VCS Theatre Arts Director Thom Babbes. “I couldn’t have hoped for anything better. I couldn’t have given a gift to these kids any better than that.”

Added VCS Head of School Tom Konjoyan: “To win the Best Live Performance at the Pantages Theatre in the Jerry Herman Awards was both a testimony to our Theatre Arts Department and a lifetime memory for our students. I am delighted that our students are surrounded by incredible professionals and mentors who are providing them with incredible experiences to develop their God-gifts and talents.”

The National Youth Arts Awards will be officially handed out on May 29, when Village Christian will receive:

Nominations spanned all four 2015-2016 Village productions: Fools, Any Given Monday, Durang Durang, and Mary Poppins, which, according to Babbes, became the school’s best-selling show with sold-out performance during the entirety of its run.

“This was a magical year,” he said. “The buzz was amazing. The kids were amazing. The kids worked so hard. I just feel like a proud father. None of this would have happened without the support of our wonderful theater parents and the talent of my incredible choreographer Julietta Corti.”

Said VCS Fine Arts Director Natalie Taylor: “I am extremely proud of the accomplishments of our Theatre Arts Department this year. Thom Babbes has transformed this department and has an amazing ability to grow and develop the gifts and talents of our students. I'm thrilled they were given the opportunity to perform on the Pantages stage. I look forward to seeing some of them on Broadway someday.”

Below is a breakdown Village Christian’s additional nominations.