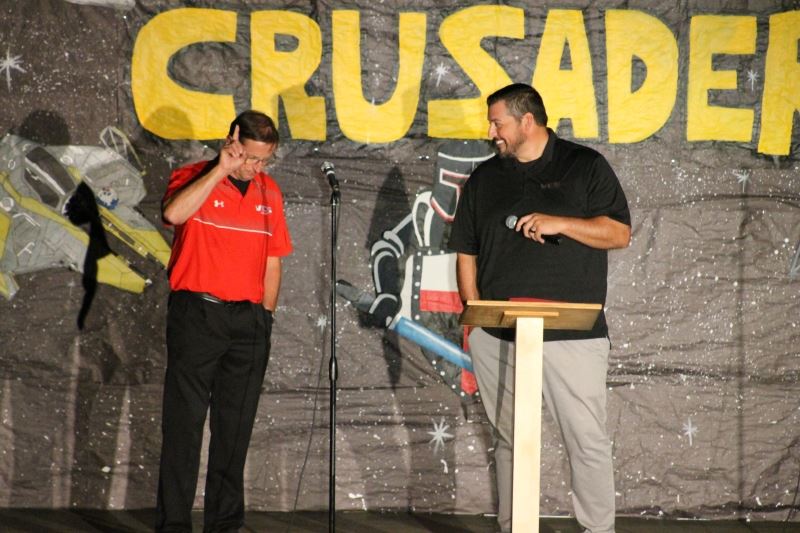 It was September of 1982 when a newly hired Dean Lagasse first stepped onto the Village Christian campus.

After more than 30 years teaching physical education and coaching athletic teams at all levels, Lagasse was inducted into the Athletics Hall of Fame at Non-Fire on October 6, 2016, at VCS.

“It’s an honor to be inducted, but I really think it represents the people I got to coach with, the people I got to coach, and God’s grace,” Lagasse said. “[My favorite part of coaching] is watching the kids improve. Bottom line. If you can get kids to do things they didn’t think they could do, that’s like giving me dessert – a big bowl of ice cream at the end. Getting them to improve and go beyond what they thought they could do or come through in the clutch.”

“The name Dean Lagasse is almost synonymous with Village Christian,” said VCS Athletic Director Kevin Aust. “Dean has served VCS as a coach, teacher, Mexicali leader, and friend for 35 years. He has coached more than 90 teams during his tenure, and you would be hard-pressed to find a VCS student over the last three decades that would not identify Dean as someone who impacted their life for God. Dean is one of the most beloved Crusaders of all-time and has more than earned his induction as a coach into the VCS Athletics Hall of Fame.”

I liked him and thought he’d fit in well with our P.E. Department and with the people,” Wilson recalled. “Sometimes, you just get a good feeling for a person and you don’t really know why. It worked out well. ... He’s always genuinely interested in what’s going on in your life. Sometimes that’s not spoken, you just feel it. He’s just a special guy.”

Please join us in welcoming Dean Lagasse into the VCS Athletics Hall of Fame.