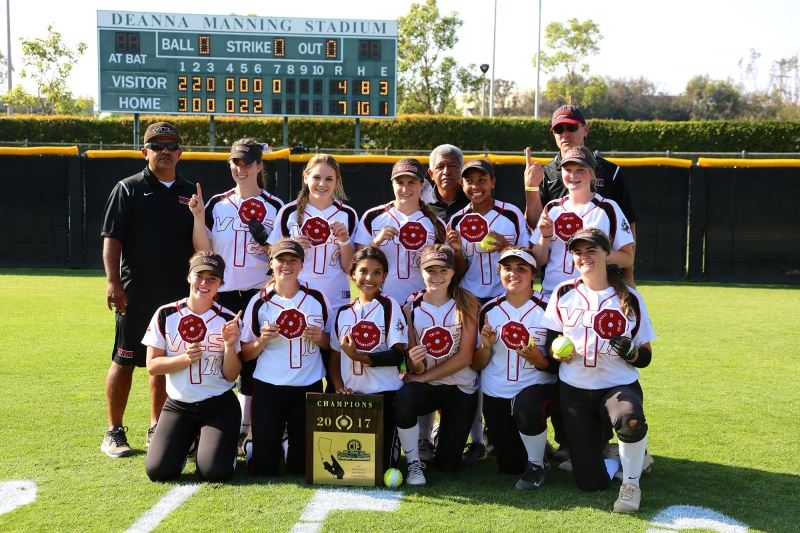 IRVINE >> The pop-up was sky-high.

All third baseman Mackenzie Hofmann had to do was squeeze it to lock up Village Christian’s first CIF Southern Section softball crown since 2003.

“My life flashed before my eyes,” Hofmann said. “I was thinking, ‘Oh my gosh, so many things could go wrong.

“But when I caught it, it was insane.”

Hofmann thrust her arms into the air after hauling in the mile-high pop-up to seal Village Christian’s 7-4 comeback victory over Santa Ynez in the CIF-SS Division 7 final Friday afternoon at Deanna Manning Stadium at Bill Barber Park.

Not bad for a team that started six freshmen and one sophomore.

Hofmann was instantly mobbed by her teammates after her catch in a lively celebration.

They proudly accepted their CIF championship plaque and patches. They took pictures under the center-field scoreboard. And they proudly donned their championship T-shirts.

“The girls did such a great job. I’m so happy with how they came together and finished,” Galindo said. “In the middle of the year, we had some doubts because we didn’t have that many girls, but they came together. It’s a pretty great accomplishment, and I’m excited about the future.”

Village Christian answered immediately after Santa Ynez took a 2-0 lead in the top of the first inning with back-to-back jacks by Kaylani Miller and Melgar to flip momentum and take a 3-2 lead.

“We had a lot of energy and it started coming together at that point,” Miller said.

Melgar slow-trotted around the bases on her solo homer

Melgar settled down after committing three illegal pitches and yielding four runs in the first two innings, shutting out Santa Ynez for the final five innings.

“It was a different kind of momentum,” said Melgar, who wore a visor signed by former U.S. national team member Jennie Finch. “Some of it was my fault with the illegal pitches, so I was definitely working hard to make up for it.”

Catcher Bella Orozco, who had three hits, said Melgar was locked in.

“She was pitching good,” Orozco said. “She had a good working riseball and her screw was working real good.

“The thing about this team is that we build on each other.”

Trailing 4-3 in the fifth inning, Hofmann provided a major lift with a laser toward center field that just cleared the wall, giving Village Christian a 5-4 lead.

“I was so pumped rounding the bases,” Hofmann said.

Village Christian added key insurance runs on sacrifice flies by Ella Benward and Carley Gay for a 7-4 lead in the sixth.

“We’re a super young team, and we’re just super grateful to be in this position,” Gay said.