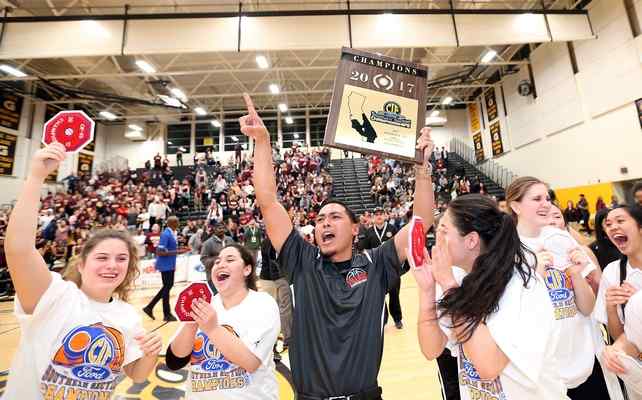 SANTA ANA >> The moment was certainly not too big for the Village Christian girls basketball team.

Their bus ride was like any other game. They walked into the Godinez High gym with an aura of confidence, not too cocky and definitely not meek. They even came together for their customary pregame prayer with their parents and friends in the corner of the court.

Yet the celebration was unlike anything it had experienced before.

And they brought the celebration into the stands with their raucous group of fans, soaking in the moment.

“This was everything we’ve been working for,” Village Christian’s Leslie Aguilar said. “We love the adrenaline, we love the crowd. And we went out and played our way.”

Both seemed to answer every time Valley Christian mounted a run.

“Leslie and I have been playing together for six years. This feels amazing,” Cacho-Negrete said. “I can’t thank the coaches and administrators enough for believing in us.

It resonated a little more with the Village Christian players, who were thwarted in the CIF-SS semifinals last season before getting a second life in the CIF state tournament, where it advanced to the state final.

“We keep saying this was a business trip,” Sampang said. “Every team hopes and dreams of playing here, but we knew we had to take care of business once we were here.”

Sampang told his team to channel its inner lion and wolf. A hybrid almost.

A pride of lions. A pack of Wolves. A unified army of Crusaders.

“A lion isn’t a lion unless it has the heart, and a wolf doesn’t hunt alone. It hunts in a pack,” Sampang said. “We wanted our players to have the hearts of a lion and the leadership of a wolf.”

It was a pack mentality early as Village Christian raced to a 16-3 lead.

Then it got interesting.

Valley Christian chipped away at the lead, ramping up the defensive pressure on Village Christian and creating several easy looks in the second quarter.

By halftime, Valley Christian had closed the gap to 23-19.

Then Aguilar took over in the fourth.

The teams had split during the regular season as Valley Christian posted a 55-52 win on Jan. 13 and Village Christian answered with a 44-32 victory on Jan. 27.

“It’s a mental game at this point,” Sampang said. “We all know each other.”