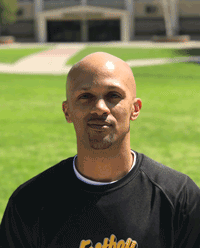 Potts is coming off three successful seasons at Burbank High School, where he led the Bulldogs to the playoffs each year, including a run to the CIF-Southern Section championship game in 2017 – only their second title game appearance in school history and their first in 91 years.

“I’m excited about the opportunity here at Village Christian School,” said the Bethany University graduate, who begins at VCS immediately. “[VCS has] a very strong tradition of winning championships. The athletes here have the support to succeed. It’s a great environment for student-athletes, and they are going to get a great education, which I think sells itself. I think the basketball program also sells itself, and we are going to get it back to a winning culture.”

The former Bakersfield College all-conference guard knows a thing or two about creating a winning culture. During his time at Burbank, Potts led the team to 17 wins or better each season, including a school-record 25 victories in his second year.

A firm believer in developing the program at all levels, Potts served as an assistant at the California Institute of Technology and the head JV coach at Calabasas before his time at Burbank.

“If you establish a strong culture and build your basketball brand, the success will come,” he said. “Being good teammates, having a great reputation, being first-class student-athletes [are priorities]. You have to have a strong staff and support system. Those things lead to wins more than just Xs and Os.”

“I am thrilled to have someone the caliber and character of Coach Potts to lead our student-athletes to thrive -- on and off the court,” said Head of School Tom Konjoyan.

VCS will host a basketball meeting tomorrow night at 5:30 p.m. in the Chapel, giving all players and parents a chance to meet the new coaching staff.