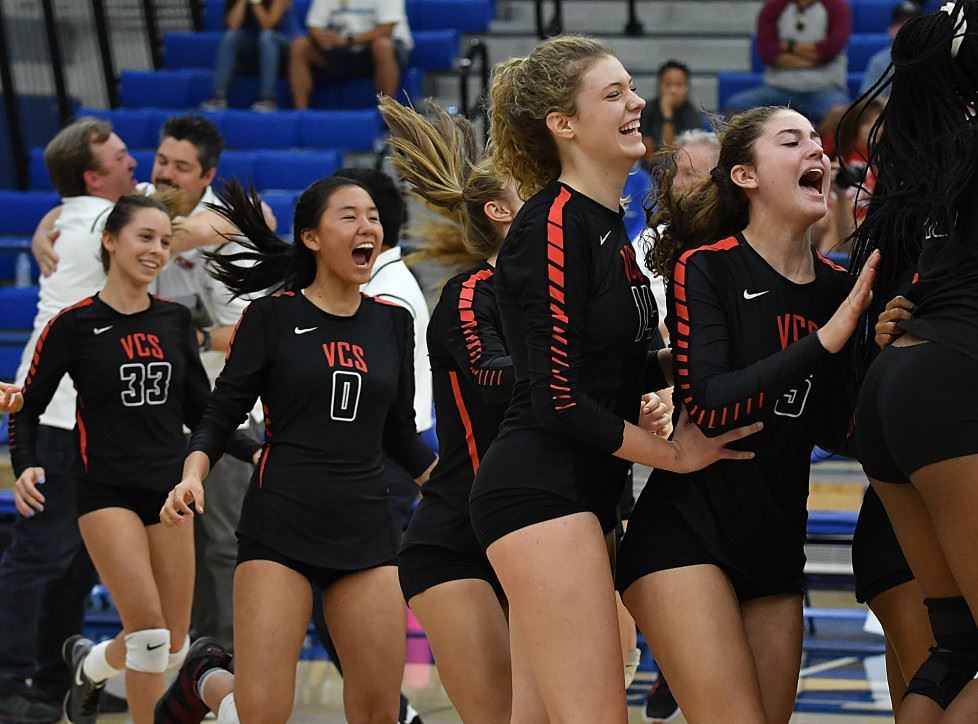 NORWALK – Laguna Beach jumped out to a sizable lead over Village Christian in the first set of the CIF-SS Division 3 girls volleyball championship game Saturday at Cerritos College, at which point Village Christian coach Brent Asuka called a timeout.

“We just worried all season (about) what we’re doing on our side,” Asuka said. “That’s how we got through the match. Another motto of our season has been to take one point at a time, and if you worry about how to get the next point and not the grand scheme of the score, then we can inch our way back in the game, and that is what we did (in the first set).”

After trailing 9-4 in the first set, the Crusaders (36-9) went on a 6-1 run to tie the score. The teams stayed within a point of each other until Village Christian pulled away at the end with a 10-4 run.

After the first set, Laguna Beach’s longest run was 4-0.

The Crusaders, who were undefeated in the Olympic League, went on runs to open the next two sets, forcing the young Breakers (18-14) to play from behind the entire time.

“We played it by the book and we had a great game plan,” Laguna Beach coach Shawn Patchell said. “We had a nice lead. They called a timeout and they responded really, really well. Our heads are still spinning.”

Village Christian outside hitter Emma Napoleon led all players with 13 kills and had five in the final set.

Libero Campbell Jensen played outstanding defense, finishing with 19 kills for the Crusaders, and Kendall Jensen had 32 assists and eight digs.

“I wouldn’t trade this moment for anything else, just to go out there and fight with my (teammates), it was incredible,” Kendall Jensen said. “It was crazy. I loved every single minute of it.”

The Breakers, winners of the Wave League, didn’t have a single player with double digit kills.Cambria Hall and Piper Naess led Laguna Beach with nine kills each and Hallie Carballo finished with 16 digs.

The Crusaders defeated the Breakers in four sets when they played Sept. 21 at Laguna Hills High School.

Both teams will play in the CIF State playoffs, which get underway Tuesday. Pairings for the state playoffs will be announced Sunday.

“We want to get back here,” Patchell said. “We’d kind of like to play them again in state.”