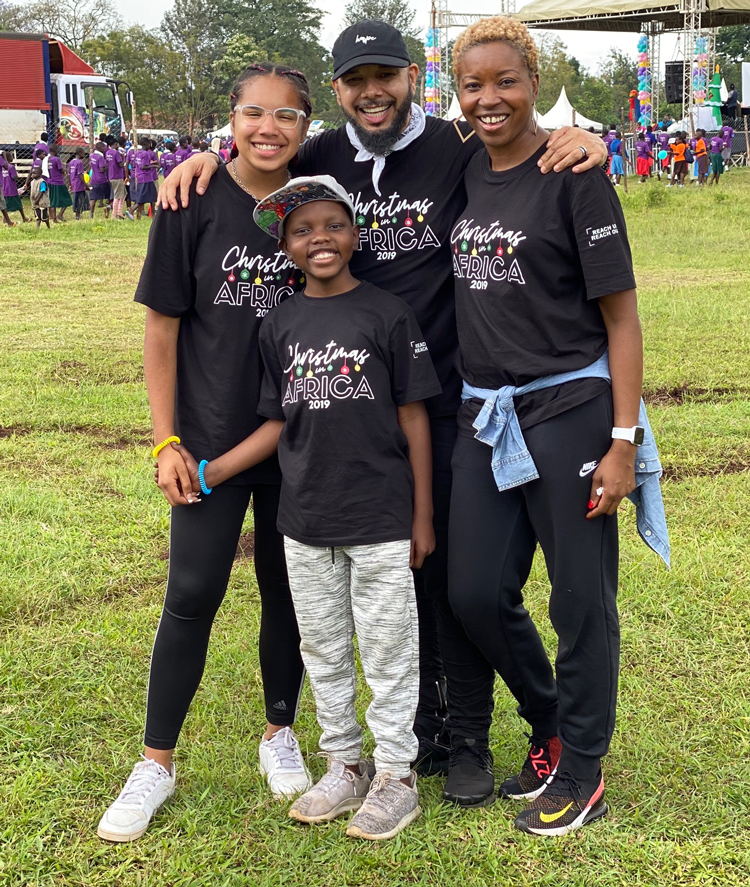 20 Now to him who is able to do immeasurably more than all we ask or imagine, according to his power that is at work within us, 21 to him be glory in the church and in Christ Jesus throughout all generations, forever and ever! Amen.
Ephesians 3:20-21

On December 6, the Jones-Moreno family flew to Africa with their nonprofit, Reach Up Reach Out, to provide Christmas presents to 5,000 children in Uganda and Kenya.

They started the outreach five years ago after finalizing the adoption of their son, Caleb, a young boy with a beaming smile and even bigger spirit.

It was also the beginning of a remarkable journey that in the spring of 2019 plunged them into the deepest of valleys when Caleb was diagnosed with stage 4 osteosarcoma, an aggressive form of bone cancer that on its own can be devastating.

But this isn’t a story of tragedy. It’s a story of miracles, of perseverance, and of community; of ups and downs; and one to bring joy this Christmas.

“This season has been one of the most difficult seasons in our lives, but yet, we wouldn’t trade it for the world because we have experienced the Jesus of the Bible,” Alex Jones-Moreno says. “This is not our story, but this is God’s story of His faithfulness, and His goodness, and His healing power at work in all of our lives.”

They had to take it one day at a time, “choosing joy” amidst the struggles, they said.

However, some days stood out more than others.

“There are a few dates I’ll never forget, and I’m not good when it comes to remembering numbers or dates,” Alex says.

The first one was in April.

It was a normal day in third grade for Caleb when he began experiencing pain in his leg.

The Nurses’ Office called the Jones-Morenos, and within hours, Alex and Caleb were in Urgent Care, where medical staff insisted the pain was simply the result of a sports injury.

The assessment still didn’t sit well with Alex, who insisted on an X-ray. Still, Caleb was cleared and the Jones-Morenos headed home.

“First question he asked me was if I was sitting down,” Alex recalls.

There was a large mass on Caleb’s femur that was consistent with bone cancer.

Forty-eight hours after picking up Caleb from school, they received the shocking diagnosis from Children’s Hospital Los Angeles confirming their worst fears.

Having served in full-time ministry for over 20 years, the Jones-Morenos felt rich in relationships, sowing into people and walking alongside them in their times of need. So, in this season of hardship, Alex, Shunna, and their 14-year-old daughter Layla began to lean on their family, friends, church family, and the Village community.

They posted updates on social media, gaining followers worldwide during 16 rounds of chemotherapy, severe side effects, labs, bloodwork, and an overall grueling schedule.

People checked in with them regularly, stopping them for prayer, a quick conversation, or simply a hug.

“[God] has shown up in the form of people,” Alex says. “Our Village community has been so clutch, so tangible. The hands, the feet, and the voice of Jesus – daily.”

Says Shunna Jones-Moreno: “Keep trusting. Keep walking through the valley. We all hit those valleys. Don’t stop walking because He’s walking with you. Look up, because we looked up, and we saw a sea of faith-filled prayer warriors.”

Treatment continued, and every day they were encouraged, supported, and loved upon, they say.

Then, came the next milestone.

It was time for Caleb’s first major procedure. 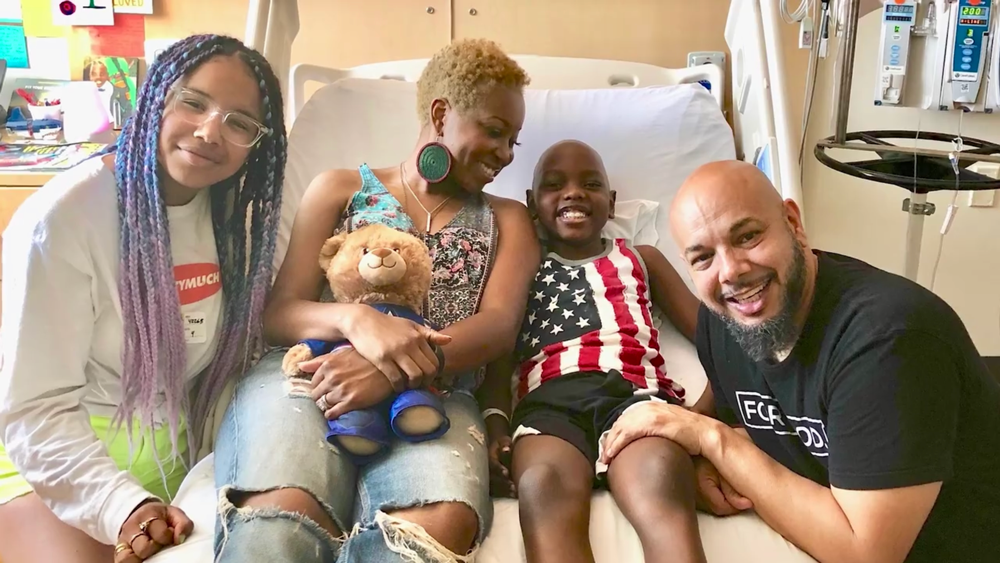 Throughout treatment, there was discussion that the left leg would need to be amputated, and there certainly were no guarantees when his limb salvage surgery began.

The femur and knee were removed, and in their place, doctors successfully placed an endoprosthesis.

The rest of his leg was saved.

“I’m someone who doesn’t ascribe to using words like ‘never’ or ‘always,’ but I can tell you Caleb is an exception to that,” Alex says. “He always has a good attitude. He never complains. You are talking about a little boy who has gone through so much pain, but in spite of that, he keeps smiling. He keeps a great attitude.”

Moving forward, Caleb will go in annually for a minor procedure to replace part of the prosthesis to lengthen the leg.

“That will allow him, as his body grows, to keep up. We call him ‘Iron Man’ and ‘Cyborg,’” Shunna laughs as Caleb’s smile widens further.

But he still has another hurdle to clear – and it was a huge one. Afterward, if people weren’t smiling, it’s because their jaws had dropped.

Caleb was back on the operating table.

During his initial diagnosis, his chances of survival plummeted with the identification of cancer in his lungs.

It was finally time for the doctors to operate.

“It is something that has astonished the medical community at Children’s Hospital,” Alex says.

It’s remained that way, and the family believes the scans next month will show there is no cancer in Caleb’s body.

After his two remaining chemotherapy treatments are completed in January 2020, he will have semi-annual check-ups with his doctors for the next five years to ensure the cancer hasn’t returned.

And since his lung surgery, the blessings have piled up. 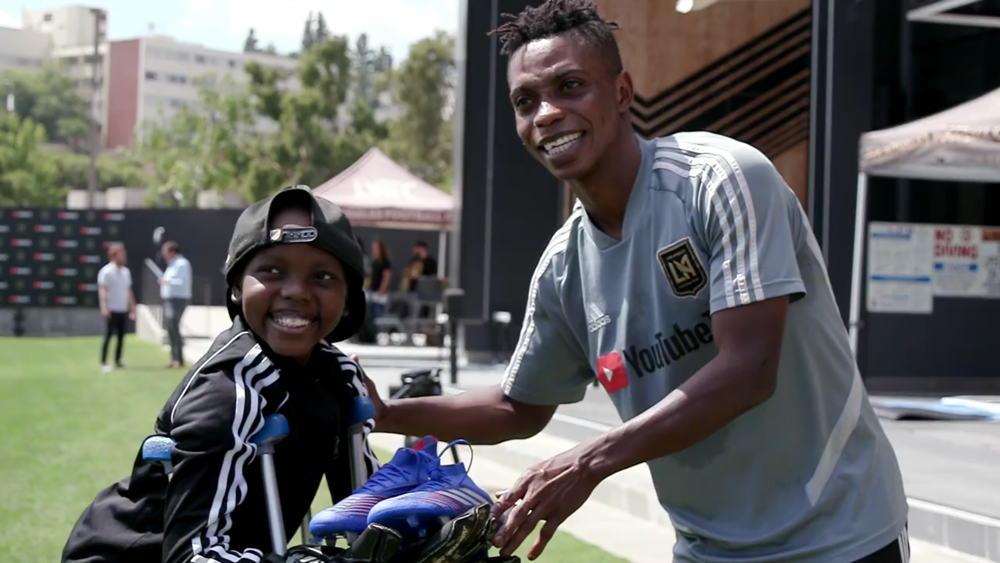 He’s played video games with Chargers defensive star Derwin James, hung out with WWE stars, and served as the honorary captain for the Los Angeles Football Club on September 21 against Toronto FC – as well as for our very own VCS soccer team.

The smile has never faded.

“God is faithful. He is faithful, and He has been tested,” Alex says. “He’s proven himself. He’s done it before, and he will do it again. Do not relinquish your faith. Don’t give up. Don’t stop. God is faithful. He will come through. He’s a good, faithful father.”

Now Caleb the Healed One, as he’s become known to friends and on social media, is in Africa with his family, sharing his story and the love of God this Christmas.

So much has changed since Shunna first laid eyes on him at the orphanage in Uganda back in 2012.

“We are very much aware that he has a huge call on his life,” she adds. “God could have chosen anyone for our family, but He chose him with today in mind – and who knows what else. We don’t know tomorrow, but God knows.”

Armed with an incredible testimony and that unrelenting smile, he truly has become a superhero.

This Christmas, he's another of God's miracles.

And though there is a 50-percent recurrence rate, the Jones-Morenos remain in faith that Caleb is and will continue to be the Healed One. 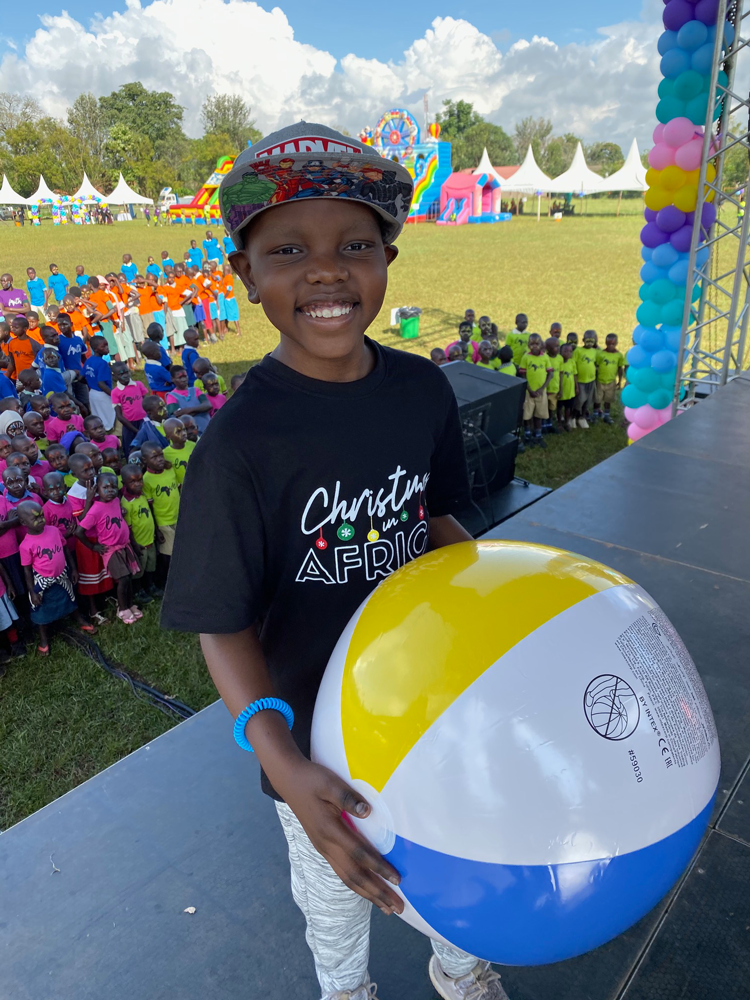