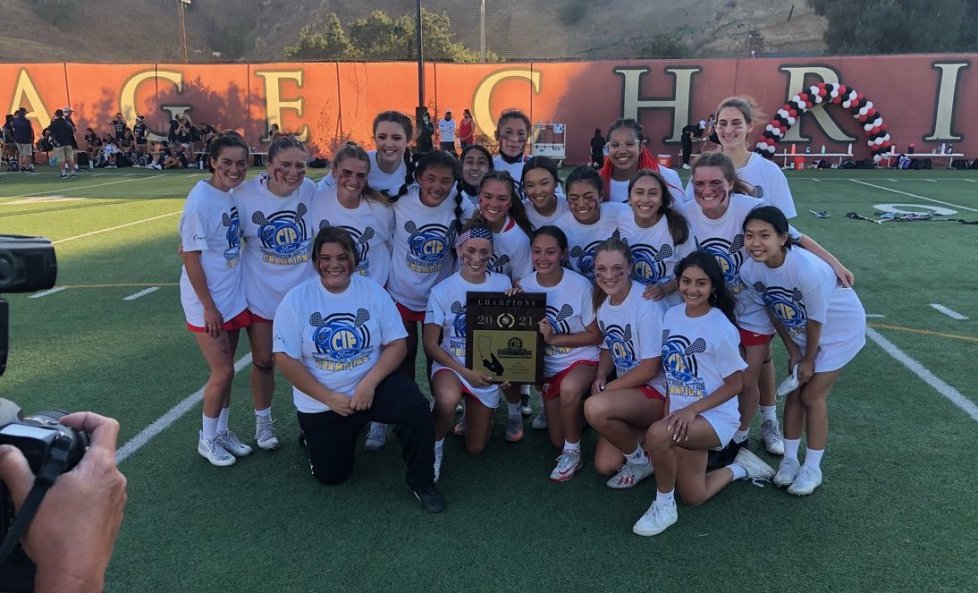 The Village Christian girls lacrosse team poses after winning the CIF-SS Division 3 title in a 13-9 victory over Murrieta Mesa on Saturday, June 5, 2021. (CIF/Twitter)

“I’m overwhelmed, loss of words,” said middie Mason Woo. “We’ve working at this for so long and to see it pay off in this one game and to come and unite for this one game is so unreal.”

Vista Murrieta (12-9) scored short-handed goals late in the game to cut the deficit to 11-9, but coach Tom Konjoyan credited Cates and Delaney Konjoyan’s scoring as well as Angelina Mendoza’s work in goal for preserving the lead for the Crusaders (12-4).

“I try to not pressure myself because I know that traps me,” said Mendoza, who had 14 saves. “I know I’ll get the next one. I’m going to try as best as I can. During that half it was a whole new thing. I was like, this is mine. I don’t care of she has the ball, this is my ball. I was being very selfish.”

Prior to joining the girls lacrosse team, Mendoza was a soccer goalie. She’s one of several players on the team who picked up lacrosse in high school or in their late teens.

They came together to form Village Christian’s team last year, but the season was cut short due to the COVID-19 pandemic. The Crusaders won their first six games before the end of the abbreviated season and continued to train until lacrosse began again this year.

Tom Konjoyan hopes that Village Christian’s success will inspire more girls to come out and play.

“What it shows to every girl out there is if you want to learn a new sport, you can still in high school,” he said. “I think it’ll give a bunch of whole new girls who want to try lacrosse the confidence to come out and play at a championship level.”