Record-Setting Jason Christensen ('04), CIF Champion and Player of the Year, Inducted into Athletics Hall of Fame

On Friday, November 5 before VCS Football's CIF-Southern Section first-round playoff game, Jason Christensen was inducted into the Village Christian Athletics Hall of Fame. Members of his family, friends, and former teammates and coaches were on hand to honor the second of two 2021 honorees.

Below is the article that appeared in the program inserts at the game. 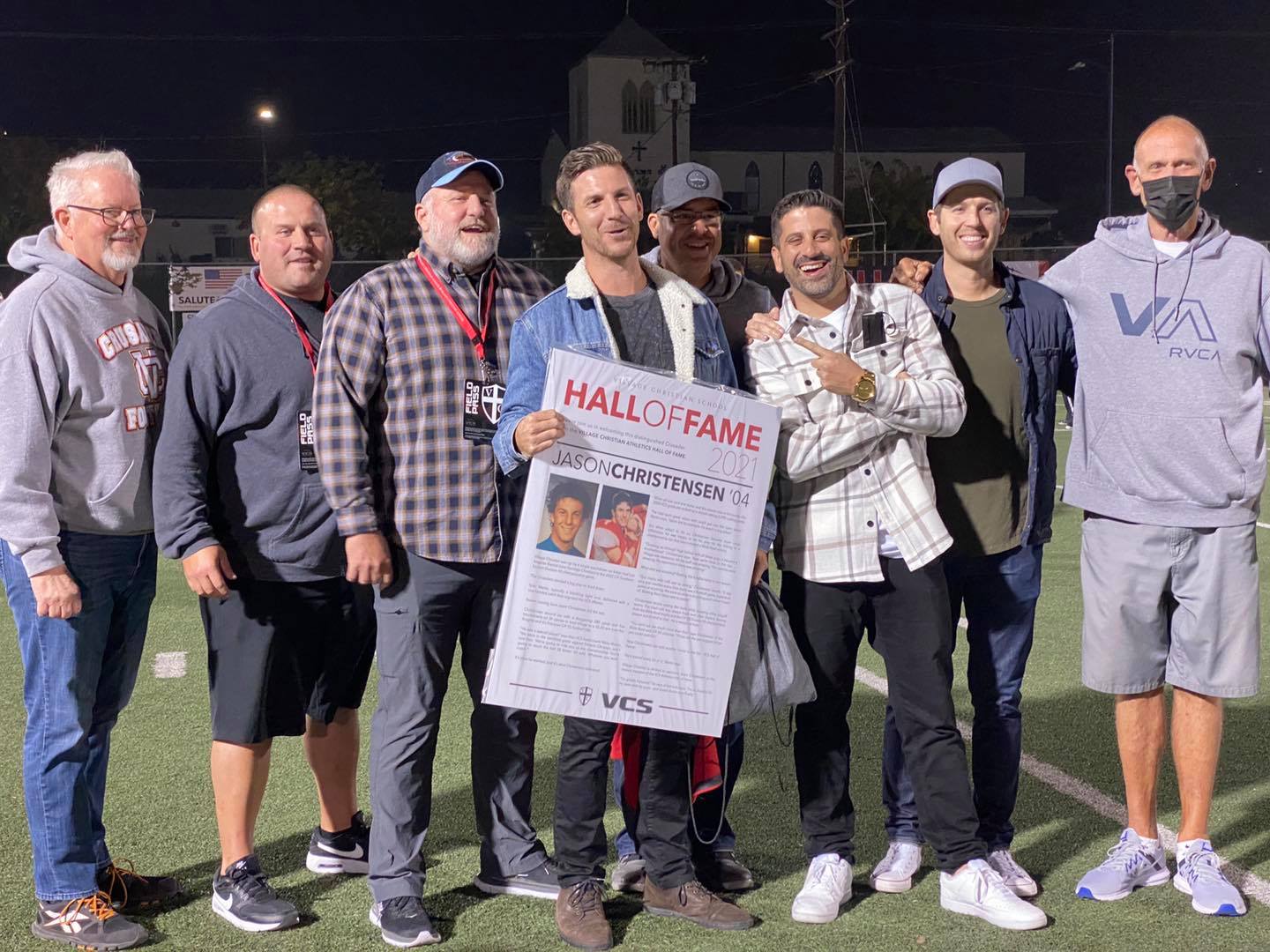 The Crusaders needed a big play on third down.

Senior running back Jason Christensen did the rest.

Christensen wound up with a staggering 280 yards and five touchdowns on 30 carries to lead Village to a 42-20 win over the Knights and it’s first-ever CIF-SS football title. 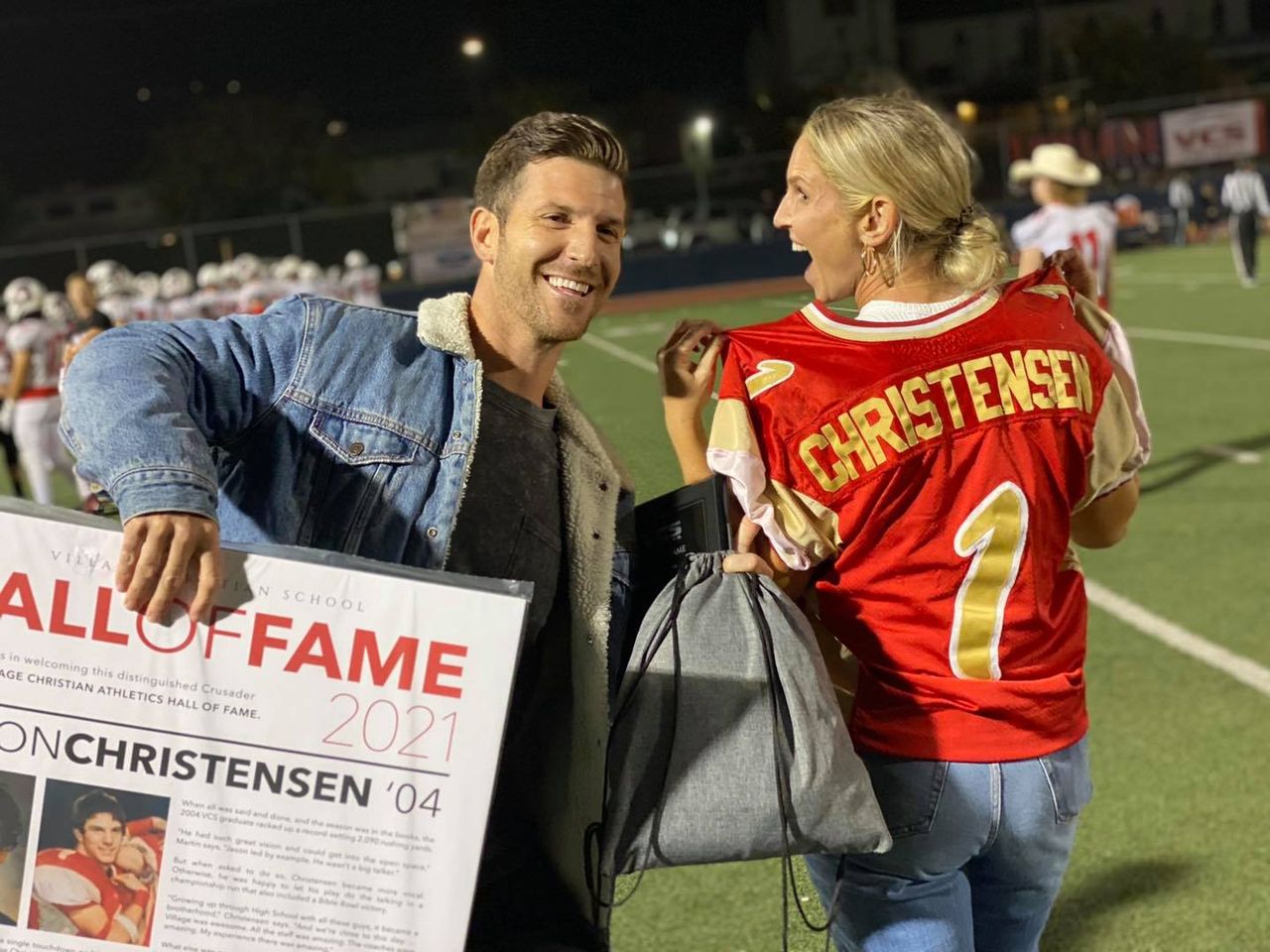 “He was a special player,” says then-VCS head coach Marty Martin. “We were in the semifinal game against Ontario Christian, and I told him, ‘We’re going to ride you to the championship. You’re going to touch the ball 30 times.’ He said, ‘Whatever you want, coach.’”

It’s what he wanted, and it’s what Christensen delivered.

When all was said and done, and the season was in the books, the 2004 VCS graduate racked up a record-setting 2,090 rushing yards.
“He had such great vision and could get into the open space,” Martin says. “Jason led by example. He wasn’t a big talker.”

But when asked to do so, Christensen became more vocal. Otherwise, he was happy to let his play do the talking in a championship run that also included a Bible Bowl victory.

“Growing up through High School with all these guys, it became a brotherhood,” Christensen says. “And we’re close to this day. … Village was awesome. All the staff was amazing. The coaches were amazing. My experience there was amazing.”

What else was amazing? Beating the Knights twice in one season.

“Our rivalry with LAB was so strong,” Christensen recalls. “It was pins and needles every time there was a football game, basketball game, or anything. We were so close to knocking each other’s head off. Beating them twice was so sweet.”

Christensen recalls seeing the rivals while scouting other playoff teams. The trash-talk was always fresh and often heated. Raising both the Bible Bowl trophy and the CIF-SS Division XII championship plaque put an end to that – for a season at least.

“You can’t ask for much more than that,” says Christensen of the Bible Bowl and CIF-SS victories. “Those are the two biggest things you could wish for.”

Now Christensen can add another honor to the list – VCS Hall of Famer.

“He’s earned every bit of it,” Martin says.

Village Christian is thrilled to welcome Jason Christensen as the newest member of the VCS Athletics Hall of Fame.

“I’m greatly honored,” he says of the induction. “I’m so thankful for my team and my guys – and Dustin Burke specifically.” 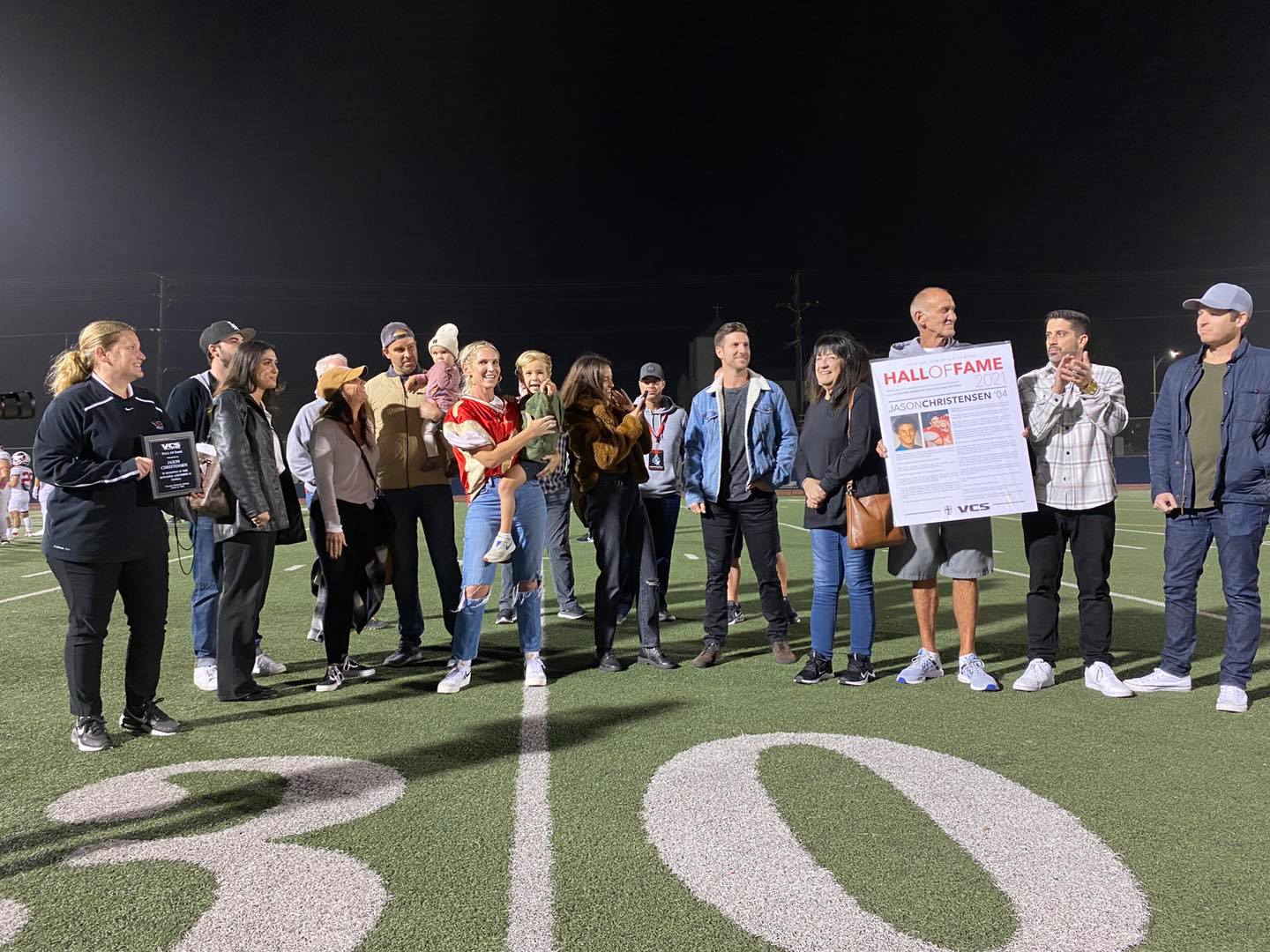