On Friday, October 22 before the 2021 Homecoming football game, the late Dustin Burke ('04) was inducted into the Village Christian Athletics Hall of Fame. Members of his family, friends, and former teammates and coaches represented the beloved leader of VCS football's 2003 CIF-Southern Section Division XII championship team and the 2003 CIF-SS D-XII Defensive Player of the Year.

Below is the article that appeared in the program inserts at the game. 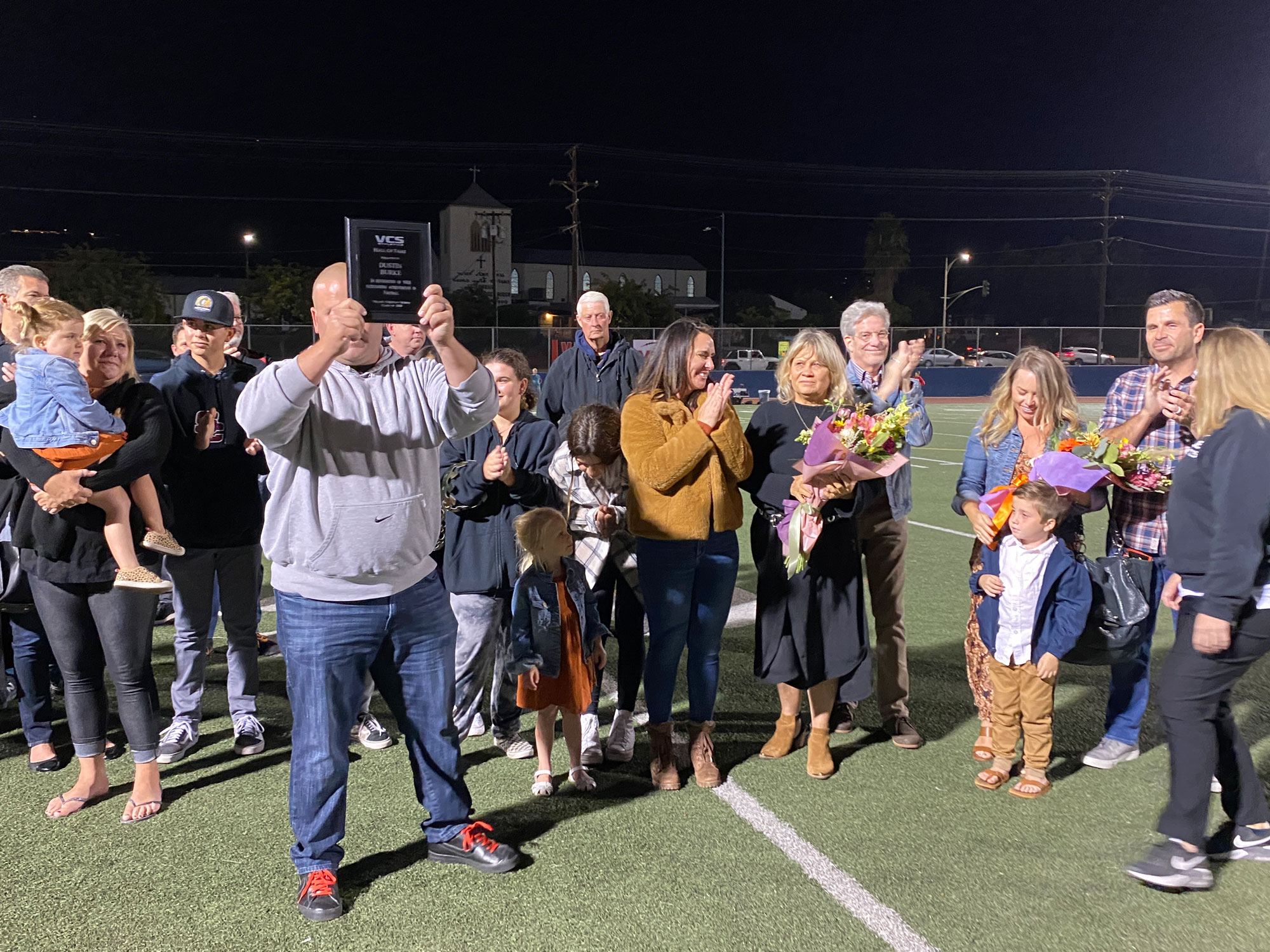 Of all the gifts then-head coach Marty Martin received, one means more now than he could have possibly imagined – a shadow box celebrating the CIF-SS title made by one of the football team’s four captains, senior linebacker Dustin Burke.

“He did it all himself,” Martin says. “On the back he wrote the most awesome note to me. When they called me and told me he had passed, I went into my office, got it out, and wept.”

Burke, a 2004 VCS graduate and the 2003 CIF-SS Division XII Defensive Player of the Year, died of heart complications in January 2021. The father of three’s passing was a shock to his family, former teammates, and the community at large.

“You never think those things are going to happen to your family, you know,” says Luke Burke, who coached his brother and saw the value football had in his life. “He really found playing football as his path of leading these guys and his niche in high school. When it came to school and football, he took them very seriously. And it got him a CIF championship and player of the year.”

However, Dustin’s impact extended far beyond his leadership on the field.

“It didn’t matter who it was – it wasn’t just football kids. He reached outside and impacted our entire campus,” Martin recalls. “If there was a kid eating lunch alone, he would go talk to them or just walk with them to class.”

When it came to football, however, his voice rose the loudest.

Described as the quarterback of the defense, Burke’s hard-nose style of play and commitment to his teammates were emblematic of everything VCS Football stood for.

“Dustin was the heartbeat of our team. He gave all the pregame and postgame speeches. He did all the right things. He deserved the world,” says former teammate Jason Christensen.

“He was fearless,” Christensen continues. “He did not back down from anybody. We played Oaks [Christian] when Oaks had nine [NCAA] Division I players. He was not scared. It was so admirable to be able to witness that.”

Burke was committed to his preparation – studying film and hitting the weight room. Martin recalls Burke’s morning arrivals to team lift and all the players who would pour out of his Crown Victoria.

“There’s times when he’d pull into weight training, and he’d have six or eight guys in that car,” Martin laughs. “It looked like a clown car.”

The awards and All-Star Game invites were all there, but Burke was more focused on raising others up than individual trophies.

“He was very humble and didn’t realize the magnitude of what he did and how he impacted people,” Luke Burke says. “He would have wanted the rest of the team out there [getting inducted] with him.”

Village Christian is proud to welcome Dustin Burke to the VCS Athletics Hall of Fame.